THE Football Association has issued new guidance banning heading in training for Under-12s and recommending a "graduated approach" for U12s to U18s.

The guidance follows publication last October of an independent study by the University of Glasgow and Hampden Sports Clinic into the incidence of degenerative neurocognitive disease in ex-professional footballers.

The study found that the professional footballers in the sample were around 3.5 times more likely to die of dementia than the matched population.

The FA guidance is:

There is no guidance for heading in matches. Les Howie, Head of Grassroots Delivery for the FA since July 2019, said they had resisted calls for heading to be banned altogether.

“The FIELD study did not show that heading the ball was the cause to the link with incidence of degenerative neurocognitive disease in their sample group of ex-professional footballers who were born between 1900 and 1976,” he said.

“As a result, there was no evidence to suggest that heading the ball, at any level of the game, should be banned. Heading the ball is a unique aspect of the way football is played, so this needed to be given much deliberation and consideration, notably with the support of our independently-chaired FA Research Taskforce.”

Howie pointed out that heading is actually rare in youth football anyway.

“The research shows that on average there are only around two headers per game in children’s football, which shows that heading the ball is an infrequent occurrence at that level of the game," he explained.

“The attention of our FA Research Taskforce then moved to football training, where heading the ball was likely to be more frequent and where bespoke heading practice sessions could be more prominent. The focus is on quality of heading training, rather than quantity.”

Next season, the FA is introducing a rule change that will see U10s using size three footballs, while coaches are advised not to over-inflate the ball when introducing heading in training, “instead using the lowest pressure authorised by the Laws of the Game.”

FA chief executive, Mark Bullingham, said: "This updated heading guidance is an evolution of our current guidelines and will help coaches and teachers to reduce and remove repetitive and unnecessary heading from youth football.

"Our research has shown that heading is rare in youth football matches, so this guidance is a responsible development to our grassroots coaching without impacting the enjoyment that children of all ages take from playing the game."

Les Howie told TGG: This isn't actually a ban. We've deliberately made it guidance, rather than a regulation, because how would we police that otherwise?

This guidance only applies to training and is intended to prevent repetitive heading, like head tennis. It's not a case of coming off after a 5 v 5 and someone saying, ‘Johnny just headed the ball five times, that’s not allowed.’

But if that is happening, the coach should be looking at how he set up the session, because there are only around two headers per game in children's football and practice should replicate the game.

At Under-12s you should be focusing on key techniques and heading just isn't a key part of the game at that age.

The FIELD project gave us the opportunity to take a step back and think about heading. We've tried to be prudent and look after the welfare of the kids. We also want to make football enjoyable for everyone.

There are other things we're recommending as well, like having the ball at its lowest pressure. We need more research into this area but I think this is a measured response and takes the game scenario into account. 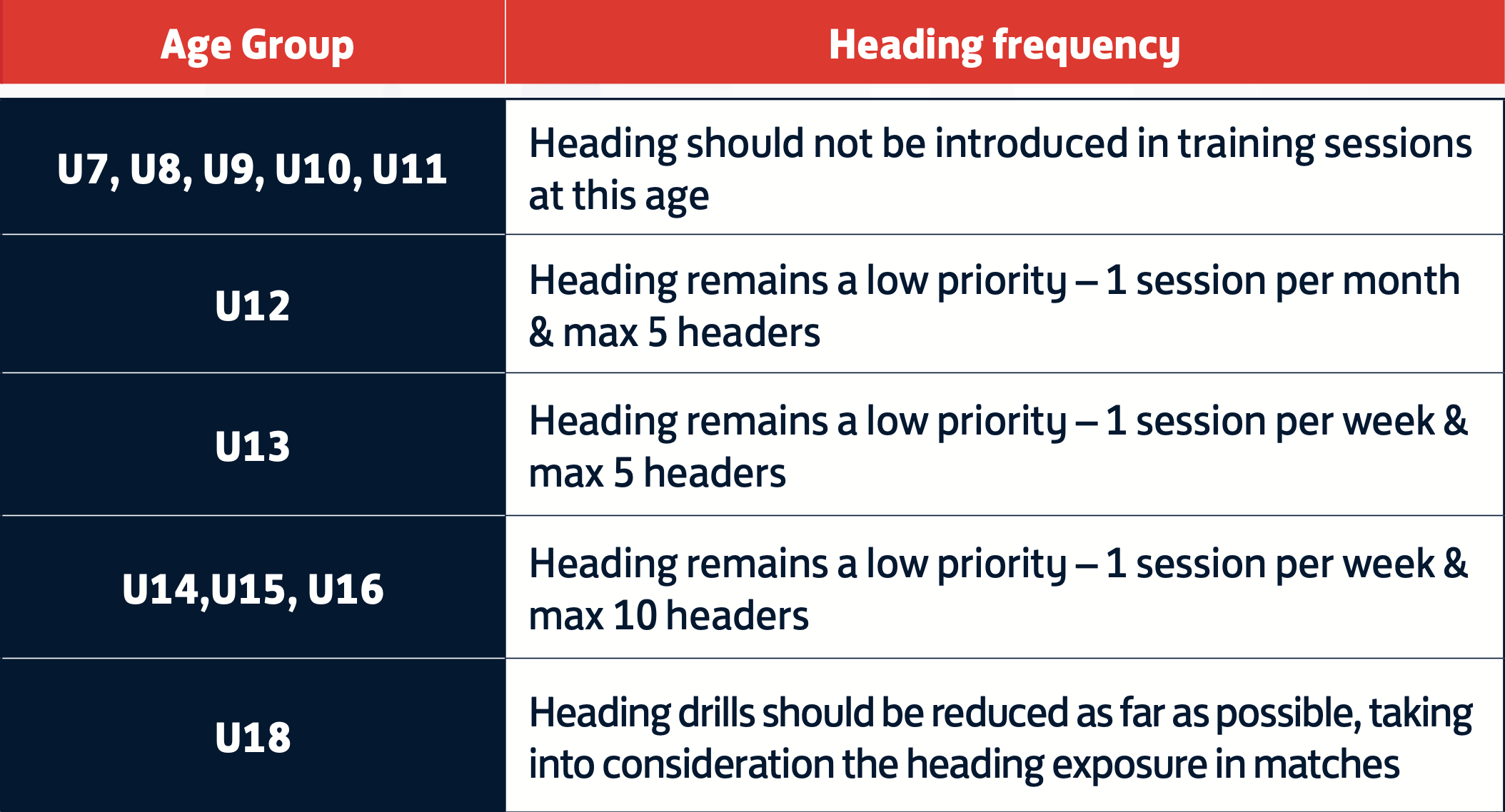