Jones has been England coach since November 2015

The Australian, who led his side to the Rugby World Cup final last November, was in engaging and thought-provoking form, talking about topics ranging from the influence of Pep Guardiola to managing mavericks to tactical periodisation.

You can listen via the player and read what he had to say below.

Eddie Jones: Back in 2012 or 2013, I had just started coaching Japan and we had a physically small team. I’ve always had an interest in football and was fascinated with how Barcelona and Spain played, because they had quite small teams too.

Through my connection with Adidas, I was able to make contact with Pep Guardiola at Bayern Munich and went over and watched them train during the day, which was fascinating.

I’d watched a lot of football coaches coach and he was by far the most engaged and enthusiastic and really drove the players hard. Then we had a meeting at night about how he achieved his ball movement with Barcelona and some of the concepts he looked at.

What also struck me was how inquisitive he was about other sports, basically looking at any invasion sport to see whether he could pick up one or two things that could help his teams play the game better.

Certainly it changed my approach to training, watching Pep run a session.

We also got Raymond Verheijen to come in and talk about his version of football periodisation. That has probably been the major change we have made over the last five years in the way we coach the team.

Raymond was brilliant, intellectually brilliant. We picked up a lot from him. We don’t necessarily agree with everything he says, but we picked up a lot. I know he can be reasonably assertive and abrasive and probably rubs up some people the wrong way.

It’s about how you set the week up, making sure each day has a certain physical and tactical theme, being very measured about the loading within that and then doing a high percentage - probably 95% - of our physical work through the game model. We make sure we create training that replicates the game model and then have the physical parameters we want stressed for the game.

EVENT: Eddie Jones will be speaking at The Future Game on August 26th

The teams I’ve coached since that period, so Japan and England, have been more consistent in their ability to be able to play with energy and tactical clarity in games. We are always compromising because we only have a short period of time with the players, but the methodology allows us to get them in the best condition we can.

I think we showed at the recent World Cup, when we had a 10-week preparation and were able to get the players physically equipped to play the game.

I think sports science, particularly I have found in the UK, has put parameters on what you can do. ‘Players can only run this amount, a certain number of days in a row’. But no-one really knows.

The greatest feedback for your training is the game. Has anyone ever played the perfect game? No.

The limitations to the way you train are set by the traditions of sports science and thinking. With Japan, we had a team that hadn’t won a World Cup game for 24 years, their average score against a top 10 country was an 85-0 defeat. We were able to change that by breaking those traditions.

We trained three times a day - 5am, 10am and 3pm - and equipped the players to play the game at the pace and intensity we wanted to play. That doesn’t work with England. With every team it’s different.

I remember when Jurgen Klopp first came to Liverpool and people were saying ‘he can’t train the players like he did at Borussia Dortmund’. He was getting a lot of hamstring injuries and there was a lot of criticism. People said, ’you can’t do that, it won’t work in the Premier League’.

Now every team wants to train like Liverpool. He had the courage to say ‘this is the right way to prepare the team for the football we want to play’.

You will get some difficulties early on, because the body has to adjust. But once your body has adjusted and become resilient to that type of training that becomes the norm and you’ll see more teams wanting to train like Liverpool.

We ask 'what does it take to get the player ready to play the game?' We might have one phase of the game that is four minutes continuous and need to make sure we prepare the players for that.

I hear about red zones, but what is the red zone? Is it a red zone set by a sports scientist or a realistic one?

You can’t take that as being fact, you need to experiment and have the courage to find out what you can and can’t do.

You have to have the courage to create situations where leadership of the team can fail, which is the best way for players to learn. The education system of rugby is to produce players who like to be told.

They go from a high school team where the coach dominates to an Academy where they’re told what to do, so they’re never actually encouraged to think for themselves. I think that’s a real flaw in the way we prepare rugby players and hopefully over the next period of time that’s going to change.

Communication skills of young people are different than they were. They communicate a lot more electronically. Unfortunately, you still can’t take an iPhone on the field, so they have to learn effective communication. Because what is leadership? Leadership is the ability to influence someone else’s behaviour.

I went to watch Liverpool play Barca in the Champions League semi-final. I remember watching Barcelona getting beaten 1-0 2-0 3-0 4-0 and it didn’t seem to me that at any stage the players got together and said ‘right, what are we going to do to fix this?’ They just allowed it to continue. That’s when you want your leadership to get together.

If you have a player like Diego Maradona or Lionel Messi, you have to give them the licence to do what they’re good at and accept that maybe a lot of what they do is outside the framework of the normal player and adjust your team to that. But they have to be good enough players to be able to do that. 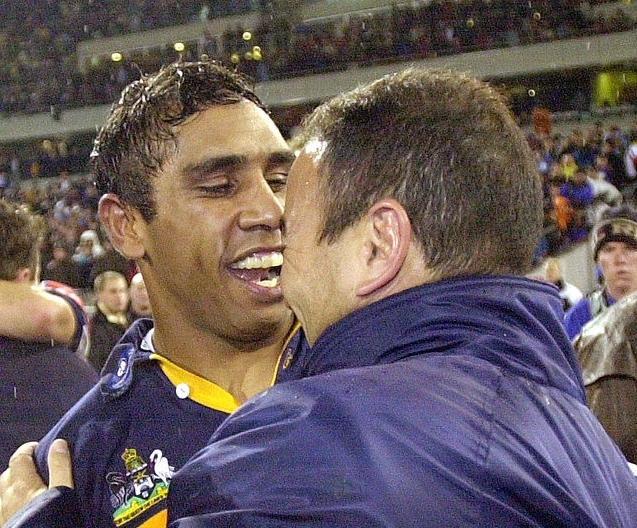 I remember at the Brumbies we had a winger called Andrew Walker (left), who was our top try scorer for two years. He was a difficult guy, but we went out of our way to make sure he could play for us, because the players wanted him to.

If the maverick is giving value to the team and the rest of the players see how valuable they are, they will accept those differences. But if they don’t see them bringing value but just taking away from the team then it becomes a problem.

I was lucky in Australia with a succession of guys like Andrew Walker, George Smith, Joe Roff - brilliant players who were outside the system. With England, we’ve got Jonny May, who can score a try out of nothing and is a little bit different.

Maybe it is getting harder for these players to get through the system because of strict parameters in Academies though. They want everyone to fit the cookie cutter, they don’t want them to go too far outside the system.

You just have to see how kids are parented now - it’s a different world now. Before, you used to bang on the table quite quickly if you wanted to get something done. Now, you have to really find the right time to do it and find more ways to guide the players to what you want done rather than telling them.

The skill is still to get the message through, but rather than telling them or directing them, it’s more a matter of guiding them where you want to get them.

People move quickly now. When you go to a big shopping centre, they have constantly changing commercials, because that’s the only way to capture people's imagination. It’s the same with coaching,

We have a general rule that we don’t have team meetings for any longer than 15 minutes and try to make sure we only have three key points and that they’re expressed in as many mediums as we can - visual, auditory, movement.

The way you create a learning environment now is important, to ensure you get maximum transfer of information.

With England, we came up with our own winning metrics, which were pretty accurate. You get so much information now, as you can see in football too. As 5G comes in, the amount of information out there will be enormous.

The skill of the coach is to understand what is really important and makes a difference and how you can transfer that information to the players.

You’ve got to understand how you win games with your players and what will be the important metrics to play like that. And analysis has to be driven by the players. They are adept at this, because they’re so sophisticated with electronic equipment and data, and that’s only going to evolve further.

It’s definitely a combination of data and intuition though, which is why experienced coaches are important. You see it in football now, the number of coaches in their 50s and 60s who have accumulated all this experience and intuition and are able to work out what is and what isn’t important.

Any player I select, I like to have a one-on-one meeting beforehand just to find out a little bit about them. You want players who are driven, who like to train, who like to train tough, because then you know they have a great chance of preparing for games. Not every player has that.

Personally, I just love the game and when you love the game it’s easy. I don’t feel I’ve ever worked a day in my life. The fact I get the joy of coaching rugby to some of the best players in the world makes it easy to get up and be excited about what’s ahead.