DAVE ALRED MBE has been one of the leading performance coaches in world sport for more than three decades.

He made his name working with Jonny Wilkinson in rugby union, helping England to win the 2003 World Cup. After that he plied his trade in golf, inspiring Luke Donald to "think like an assassin" and reach number one in the world, and became the "missing link" for Francesco Molinari as he won the 2018 British Open.

Alred has also coached cricketers, footballers, Aussie Rules footballers, Olympians and business people. His methods are applicable anywhere that performing under pressure is important - which is, in fact, any sport and most walks of life.

In Episode #29 of the Training Ground Guru Podcast, Alred gave us an insight into what he does - and also how he could help England's penalty takers.

You can listen via the Player below and read an edited transcript after that.

1. Tradie with a belt

Dave Alred: Most coaches instruct. I’d like to think I grow. I choose my language very carefully so as not to make any subjective judgement.

I feel like a tradie with a belt, because you're picking the right tool for the right situation. It doesn’t matter whether it's a 14-year-old who's trying to kick a narrow angle or Jonny Wilkinson doing it before a France game, it’s the same thing, the same mental mechanics.

John Grinder was one of the founders of the NLP - neurolinguistic programming. In layman’s terms, you see what you want to achieve and don’t use deletions, because the brain doesn’t work on deletions.

There was also a book by a guy called Harvey Penick, who’s a golf coach, called the Little Red Book of Golf, which I found absolutely fascinating.

He coached professional golfers like Davis Love and Tom Watson from a wheelchair. His only model was to get players to refer back to things they had already experienced and to build from that active memory.

3. Feel and getting a zero

I use it with the golfers a lot and I get them to measure the feel. Did all the energy go into the ball? If it did, you can feel it, and you know the feeling. We say: "That came out of the screws, that came out of the meat of the racket."

I did this with cricket, too. If you’re going out to bat, the quote is "let me get my eye in." But, actually, nothing is further from the truth, because you can’t possibly have got your eye in, because the bat was blocking the ball.

The feel is what you’re actually referring to, even though you would never say: "Throw some balls, I want to get my feel in."

If you take that and know that, you will make those minor adjustments - with the bat, your feet, or your elbow - and they will be minuscule but massive. This gives you a map of self-correction.

When a guy kicks a ball, only he knows whether it was absolutely dead set and if there was no effort; whether the ball sublimely exploded off his foot and he felt balanced and controlled. That's what I call a zero and it's really important in performing under pressure. 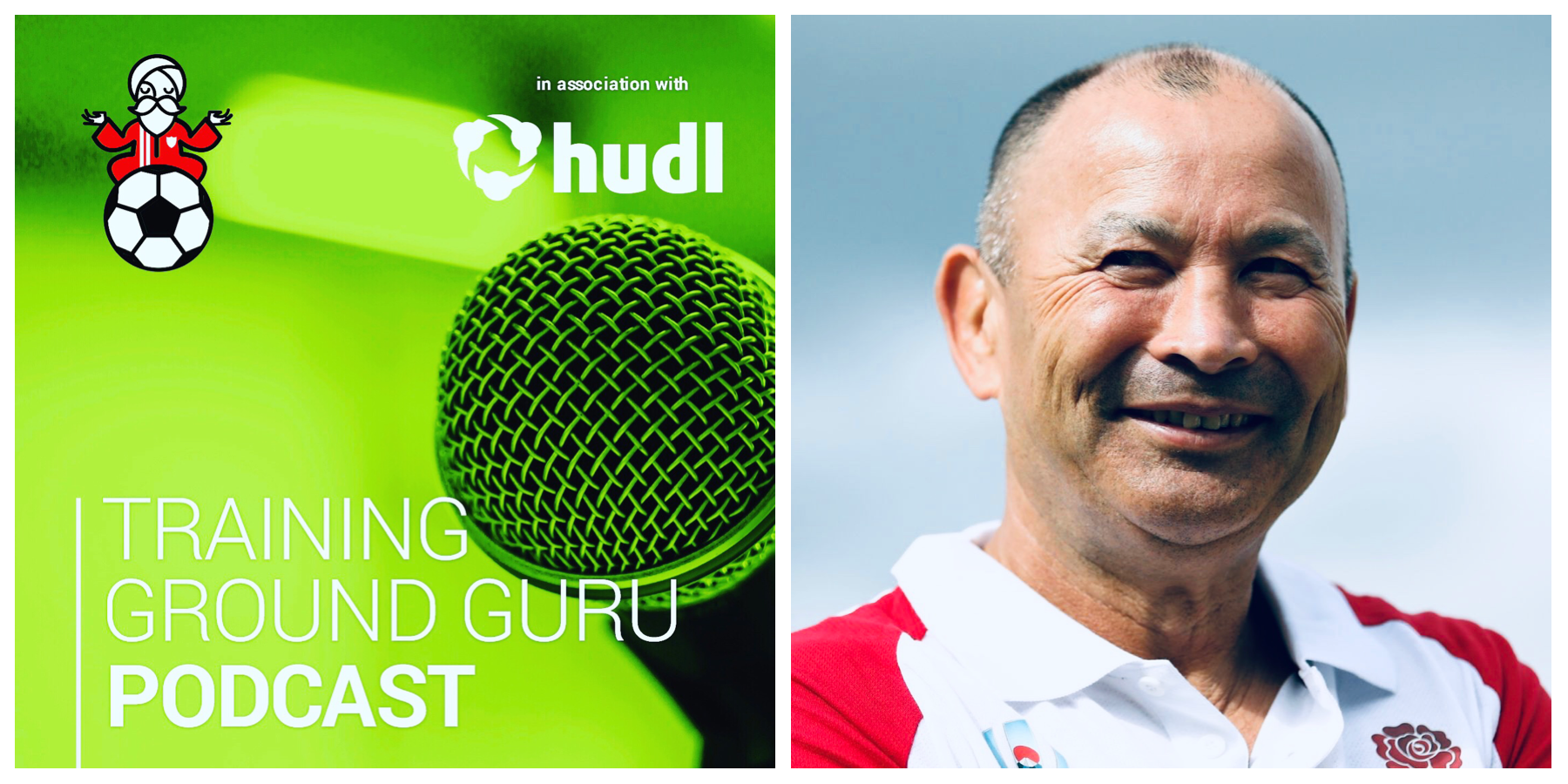 "I want to hit it as a zero and make it happen."

When you cross that threshold, that’s when you start to master the skill under pressure. It takes time, practice and it can be frustrating, but it does make a massive difference.

I remember working with Jonny Wilkinson - "You got six out of six, but how many were zeros?" It was the game within a game. We were getting more and more precise and you conditioned your body by your approach to getting zero.

When it’s zero, you have ultimate power on exactly matching your intention, because the ball can’t go anywhere else.

Sometimes it’s just not going for you. There’s a critical point at which you get a system crash, because you're thinking about too many things.

So I said: "Ok, let’s stop here for a moment," and went and put a sweatshirt on a seat behind the posts in the stand.

“That’s a couple, Harry and Doris, and Doris hates rugby. She's sitting on the sweatshirt and reading a paper. Just nudge her a little bit and let her know she’s at a rugby match."

Bang, just over the sweatshirt.

"That’s good, you’ve got her to duck. Now see if you can land the ball in her lap."

"Harry has gone to get Doris an ice cream. You’ve got to knock the ice cream out without damaging the cone."

Because all of the processes were already in Jonny's subconscious, this was the ultimate deflection of detail. He was totally focused on the outcome. The fact it was a World Cup campaign had also gone. It was just: "Go after Doris."

If I give you a lot of instruction, that’s very explicit and it’s difficult for you to do it. If I give very little instruction but ask you to kick under the crossbar, you’ll instruct yourself subconsciously, which is implicit.

When I want the golfers to practice a really soft flop shot, I stand three metres in front of them and say: "It’s got to come down in my hands."

It’s amazing the difference it makes when you take the shot out of context. Suddenly it’s not about the green, it’s about getting it in my hands, and they just do it, they don't think. Sometimes we lose that.

6. Fear and changing your perspective

I remember one of the first times England played Wales with the roof shut (at the Millennium Stadium) and there was a big thing about how the crowd was going to swallow England up. One of our players, an established player, came up to me before the game and said: "I’m really worried tomorrow, I’m scared of the national anthem and the noise."

I said: "Here’s something that might help you. Who is the crowd? During the anthem, go along the line and try and work out what each person sitting there does for a living."

They’re screaming ‘Bread of Heaven’ and he's trying to work out, "I reckon he’s probably a farmer, he looks like a sales rep," and he just loses himself in that detail.

He came to me after the game and said: "That was so good. I was just smiling during the game and felt there was no crowd, just these guys I knew."

7. Fixing a target in the mind’s eye

You have to pick a small target that engages you. Which part of the green do you want to hit? Now you’re kind of sucked into that.

When I fix the target, then come back to the ball, I let my mind go and see that target again. When that target is vivid in my mind’s eye, i concentrate in coming in on the ball and feel myself being sucked to the target.

As I'm pulling, I find myself being drawn towards it. It’s quite fascinating the power that has, how that image can virtually steer where you’re putting the ball.

8. My work in football

The first guy i worked with at Sunderland was the keeper Thomas Sorensen, who had real trouble in coping with the pass back.

He was very C shape - planted and spun round - and what I tried was getting him to be more J-shaped and to go through the ball. We had some lanes he had to hit with his goal kicking and he was very conscientious and did well.

Then other people wanted to have a go and I did some work with the forwards on ball striking, but it was probably before its time, a bit 'ticking the box'. People would say: "I've done this ball striking thing, next."

I get cross when we’re doing team runs and the kickers have been kicking all week and all of a sudden, out of the blue, one of the backs wants to start kicking. The game’s tomorrow!

Do you just brush your teeth the day before you go to the dentist? Nobody buys green bananas any more. They just want the instant - "I want to eat it tomorrow."

At Middlesbrough, I was brought in by the goalkeeping coach, when Mark Schwarzer was there. That’s when I actually worked with the current England manager and he got in trouble for coming in on his day off to work with me, even though it should have been a pat on the back.

It wasn’t seen by the coaches as something that had value, because "they can kick a ball anyway". And if the crosses weren’t quite right in a game, don't worry, there will be another one in a minute.

Top right, top left; bottom right, bottom left - even if the keeper goes the right way, he won’t get to the ball if you hit the apex at the top or the side netting at the bottom. Then it effectively becomes a dead-ball target practice for the penalty taker.

Players in other sports practice to be able to perform under pressure. I look at golfers, last hole of a Major. So could there be a more left-field kind of work to help the footballers?

The first thing is to get the posture right. Posture is massive. I see so many people collapsing and getting in a weak position, or initiating rotation when they don’t need it (on a penalty), which can be really messy.

Then work on getting the perfect strike, a zero, with no energy leak. If they play golf, which most of them do, they'll be able to relate to: "Hit it out of the screws."

Then it’s hitting it exactly where you want to match your intention. So you hit targets and increase the challenge. You might say, "we’re going to go penalty spot", then "penalty spot plus three yards". Most of the guys love it.

You might not be able to replicate all the pressure of the penalty shoot-out, but you can replicate quite a bit of it by the consequence. If there is a desire for them to achieve and it's competitive, they should develop.

You would consistently go back to that repair-technique work, because I don’t think you ever truly master technique that is flawless again and again under pressure. That's why we practice.

10. What should a penalty taker think as they walk up to the spot?

They should think: "This is going to be so good. I cannot wait to ping this ball in the back of the net. I’ve done it so many times before. I know exactly exactly what I’m going to do and how it's going to feel."