LAST YEAR was an eventful one for Dale Tonge.

He was promoted from the Under-16s to assistant manager by Barnsley, helped them secure a return to the Championship, and was sacked, all within the space of 11 months.

Things started with a phone call out of the blue on a Tuesday morning in January. “I was out walking the dog, a couple of miles from home,” the 34-year-old remembers, “when I got a call from (manager) Daniel Stendel.”

“He said, ‘I’d like you to come in and take a session with the first team... this morning."

Tonge's dog got a brisk work-out as the coach dashed home, put on his kit and drove to the training ground as quickly as he could.

"I didn’t have time to think. I just decided to get stuck in and show what I could do. It went well and afterwards Daniel asked if I’d be his assistant for a few weeks, which turned into the rest of the season.”

The German manager was soon publicly praising “a very popular addition to our coaching team” and the Tykes went on a run that eventually took them to automatic promotion, boasting the only unbeaten home record in all four divisions.

Tonge had started at the club in 2015 as a part-time coach with the Youth Development Phase, when he was 31. He progressed to lead that age group and had worked with some of the players who were now in the first-team squad. 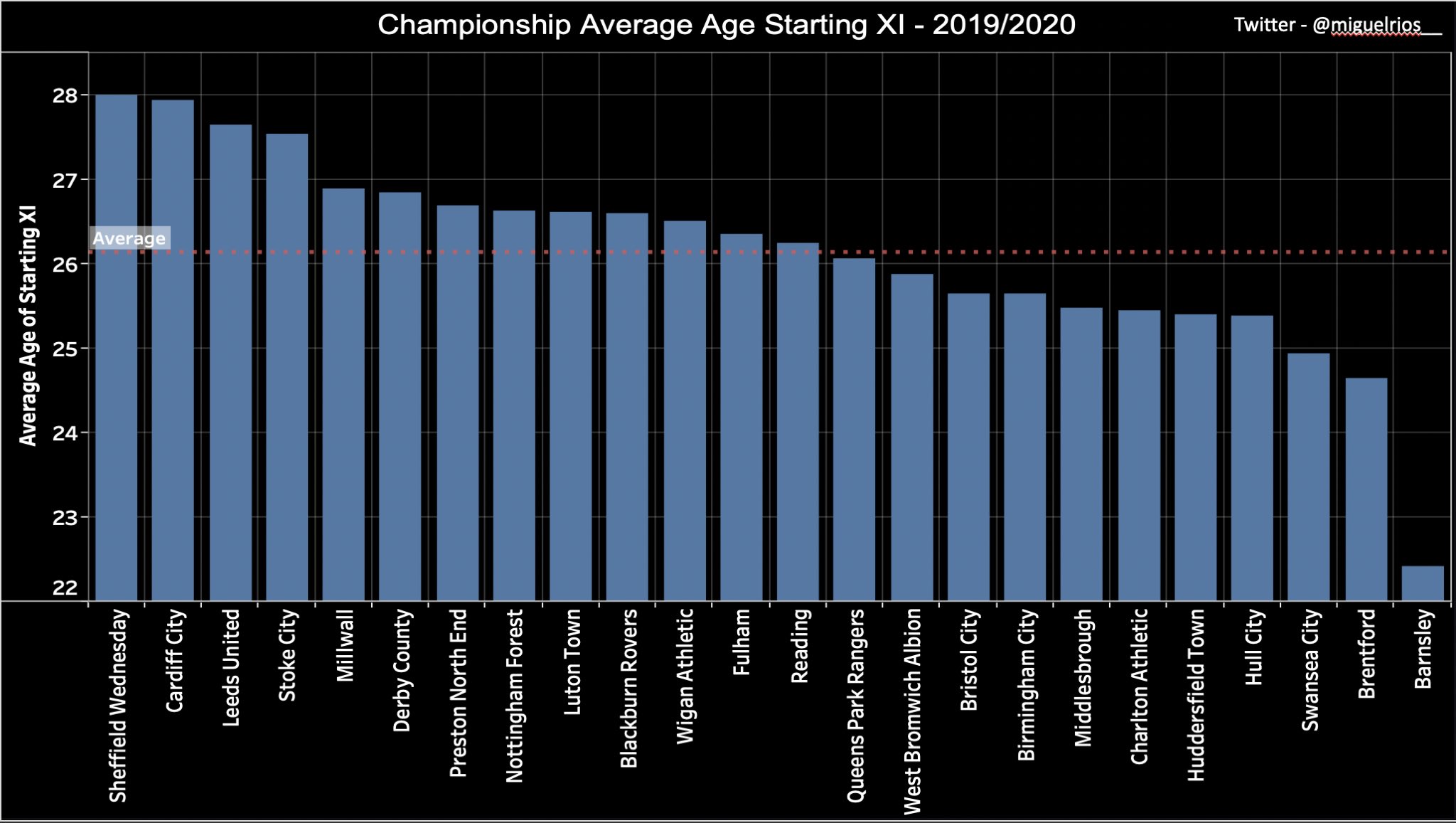 Barnsley have had the youngest starting XI in the Championship this season (source: Miguel Rios/ Opta)

This helped with his transition to the senior set-up, which was not as daunting as you might expect.

“With how Barnsley have structured recruitment, with the squad being so young (see diagram above), it wasn’t actually that different to what I'd experienced,” he explains. “Obviously the emphasis is on three points on a Saturday, but we were still looking to develop players.

“I worked individually with the lads, trying to develop them as footballers and as people, as well as in units. It was a fantastic group and they welcomed me.”

German Stendel, who had arrived at Oakwell the previous summer having experienced a season as a Bundesliga manager with Hannover 96, was “definitely a control manager”, but still wanted his young assistant to have a significant input.

“He would usually want me to start the training session and then take the main part himself, while the other coaches would watch and feed back. With the first team, it’s multi-disciplinary, with sports science, medical and analysis all involved, and the make-up of the session would depend on how the players were, their level of fatigue, whether they had played Saturday-Tuesday or not.”

Analysis formed a major part of Tonge’s job throughout the week.

“We had a fantastic analyst who had also come up from the Academy and there was an emphasis on the players taking an active role. It’s a great tool for them, which I didn’t have as a player (as a defender for Barnsley, Rotherham and Torquay).

"They’d grown up with technology and if you give them the opportunity to use it, they jump at it. You can feed the players information, but if they can see it and interact with it, which is what we can do now with video platforms like Hudl, it becomes very powerful. 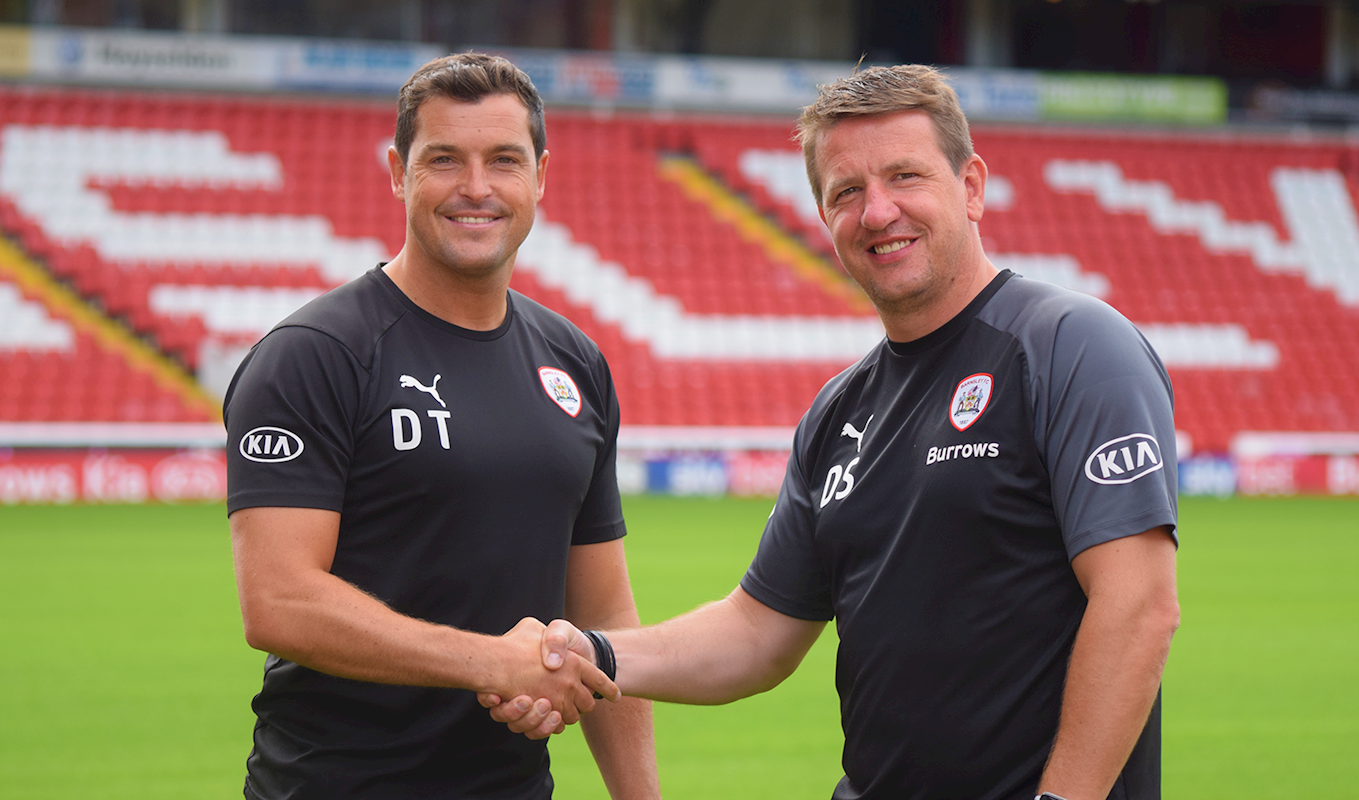 “We would send individual video clips to their phones, we had iPads at the training ground and TV screens on the walls showed a loop of footage and analysis.

“When you’re doing your pre-match analysis and preparation it’s vital that the players are engaged and that they understand, because you just don't have time during the matches.”

On matchday, communication skills were key. Although Stendel’s English was improving, it was still far from fluent, meaning Tonge needed to take a lead in getting messages out onto the pitch.

“It would be two or three words, maximum a sentence at a time,” Tonge explains. “If you’re constantly shouting, then maybe 5% of the information will be taken in, 5% will be ignored and 90% will not be heard - I know that myself from my time as a player.”

An earpiece connected Tonge, on the bench, to the analyst up in the gantry.

“He would be the one we’d worked with on all the tactical stuff during the week and would be coding the game live. If he spotted something we might not have at ground level then he'd let me know and I could pass that on.”

Sometimes you'd also see the assistant leafing through a binder of laminated sheets on the bench - something which often mystifies onlooking fans (below). 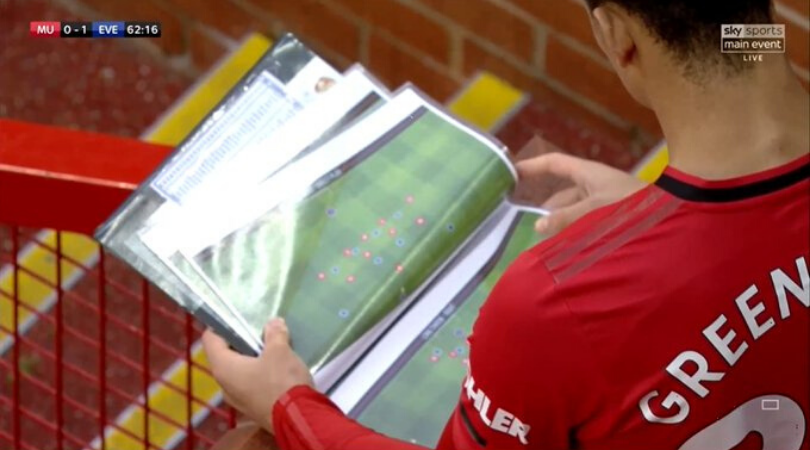 Man Utd's Mason Greenwood looking through the 'what ifs'

“Also set pieces, both for and against. These are all things you’ve worked on during the week that are then summarised in these diagrams, because you don’t have time to go through a lot of information during a match.

“If the manager decides to make a sub, for example, then you’ve probably got a maximum of 90 seconds with that player before they go on. This is why the preparation during the week is so crucial.”

Barnsley’s fine run of form was attracting national attention, though not as much as an incident in April.

Following the Tykes' 4-2 in over Fleetwood at Oakwell, the visiting manager, Joey Barton, was alleged to have assaulted Stendel in the tunnel. The former England midfielder was subsequently charged with assault occasioning actual bodily harm, to which he pleaded not guilty, and is due to go on trial this summer.

Tonge missed the incident because he was at the entrance of the tunnel shaking the players’ hands, but admits it ‘galvanised’ the group.

"We got a bit stronger mentally after that and the players really rallied round Daniel, which was fantastic to see.”

A few weeks later, and with one game still to play, the team were promoted, boasting their first unbeaten home record in an entire campaign since the 1960s.

Celebrations were followed by a summer of hectic transfer activity and then the transition back to the Championship, which proved very tough.

In October, with the side second from bottom of the table and having won only one game in 11, Stendel was sacked. Tonge continued under caretaker manager Adam Murray but left in late November when new boss Gerhard Struber came in.

Tonge has attended a lot Barnsley’s games since leaving and believes the new players were always going to take time to bed in.

“We recruited 11 players last summer," he says. "They’re getting to grips with the Championship now, but to start with they were only showing it in fits and starts, not for 90 minutes.”

Barnsley are owned by a consortium headed by Chinese-American entrepreneur Chien Lee, the founder and chairman of NewCity Capital, which also includes Billy Beane, the Executive Vice President of Baseball Operations at the Oakland Athletics.

Beane was famously the subject of the film Moneyball, played by Brad Pitt, and, like Oakland, Barnsley use data to scout and recruit players.

“It is different from most clubs, where the recruitment team or Sporting Director will talk to the manager and ask what players he wants,” Tonge explains.

“At Barnsley, the recruitment team will make the decision and bring the players to the manager. There’s a lot of stats-based recruitment and they want gems they can make a profit on further down the line, which is why they sign them on three and four-year deals.

“It’s a model they feel has been successful, which is why they are going to continue with it.”

During his weeks out of the game, Tonge has been taking in as many games as he can, visiting training grounds and talking to coaches and managers.

“It was sad to leave Barnsley, because they’re my team, but I was aware of the realities of senior football when I moved up from the Academy,” he says.

“This is why people sometimes stay away from first teams and stick to Academies, because it's not so precarious. It’s something I’m considering now, whether to go to the 18s or 23s as an opportunity to keep improving.”

Tonge is also completing his Pro Licence and has certainly come a long way from the start of his coaching career in 2015, when he had just retired from playing and was working part-time at Barnsley.

“You’d get paid £30, which was for the two-and-a-half hours of coaching plus your session planning as well, which took an extra hour and a half. You’re certainly not doing it for the money, but for the love of the game, and that’s something you have to retain no matter what level you’re at.”