Craig Pickering: Loris Karius and the road to redemption

After the despair of Kiev, Karius needs to slowly rebuild his confidence and career

WHILE it’s difficult to remember two more costly or high-profile mistakes than those of Loris Karius in the final of the Champions League last Saturday, the blunders brought back painful memories of my own from almost 10 years ago.

Aged just 21, I had the responsibility of running the final leg in the 4x100m relay for Great Britain at the 2008 Beijing Olympics. We were reigning Olympic champions and, in the heat directly before ours, the US team had been disqualified, making us firm favourites for a medal.

That didn’t happen though. I started my run too early and, as a result, Marlon Devonish, the incoming runner, couldn’t pass me the baton before the end of the changeover box, resulting in our disqualification.

So what are the next steps? Perhaps some insights from my experience can shed some light on the process.

Firstly, although it’s a cliché, time really is a great healer. What we saw on Saturday was the raw emotion of the moment, which is why the 24-year-old was in tears.

The first few hours afterwards are the worst. I remember just sitting down in my room, feeling numb, not able to sleep.

You worry about how your team-mates will interact with you. Will they treat you differently, or just completely ignore you, blaming you for taking away their chance of success?

Whilst a lot was made of Liverpool players not supporting Karius after the final whistle, he himself will know that he made the errors, and he’ll understand his team-mates’ acute disappointment.

It’s how they act in the following weeks and months that will make a difference. I had the benefit of a few final races to focus on before my season ended.

Karius doesn’t have such a luxury, not being part of the Germany World Cup squad. Instead, he gets to have a break, getting away from football for a short period and perhaps reflecting.

Part of this reflection process will be identifying why those mistakes were made. In my case, I went back and analysed why I had left early.

Pouring over all our training data, I noticed that I was consistently making this same mistake in training, but this hadn’t been adequately addressed by our coaching staff. As a result, I was committed to ensuring that I never left early in training again.

Karius will need to replay the moments in his head. For the first goal, by Karim Benzema, was he unaware of the forward’s presence, or did he mis-judge how close he was? Did he mis-throw the ball?

For the second, was his positioning correct? Did he lose concentration? Identifying the underlying causes of the mistakes is an important step to ensure they don’t happen again.

Based on this analysis, Karius and his coaches at Liverpool can work together to develop training practices that reduce the chances of him making these mistakes in future.

Whilst it’s tempting to think of errors like this as the fault of the player, the job of the coaches is to ensure that the players perform as well as possible – and this includes reducing the risk of catastrophic mistakes from happening. 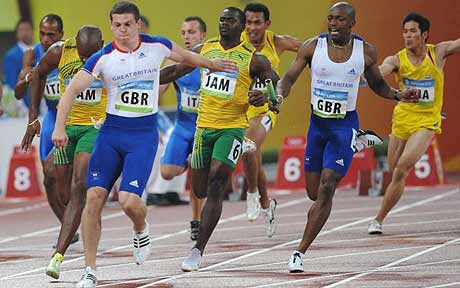 Pickering went too early and was disqualified

Sportspeople don’t want to make mistakes, they want to win, and so Karius’s errors are indicative of underlying problems that can, hopefully, be solved.

Karius clearly also needs to address his mindset. It’s both normal and completely natural for humans to dwell on their mistakes, but doing so in a sports setting can be disastrous.

The easiest way to overcome this is to focus on the process, not the outcomes. If you can do the small, constituent parts correctly, then the whole piece should be successful.

In the relay, I did this by breaking down the process into small goals. I focused intently on the incoming runner, then spotted my checkmark, and then waited for the two to meet, at which point I started my run.

I built up this routine over many training sessions, so that it became second nature. Doing it in this way is important – quite often we think of mindset as some special ingredient, whereas actually it is often born out of routine.

The key is to carry out the key skills – which, based on Karius's performance on Saturday, will include distributing the ball when an attacker is close – in a low-pressure environment, before adding further pressure by increasing the complexity of the skill, such as more attackers.

In the relay, we would focus on passing the baton perfectly at walking speed, then at three-quarters speed, then flat out. Then we would add competitors, which further challenged our skill set. Could we replicate the skill in a pressured environment?

The knowledge that we could successfully do this gave us great confidence when it came to competing at the highest level. For Karius, successful repetition in a training environment, followed by increasing the pressure through pre-season friendlies, should help increase his confidence in his abilities.

This way, if you make a mistake, you can refocus on the process again, which can stop you from dwelling on it. Clearly, on Saturday, the mistake for the first goal haunted the goalkeeper for the rest of the game, preventing him from being able to fully focus on his performance when it mattered, which is a crucial skill for sportspeople to learn.

The final step, which often comes after many more hours of training aimed at correcting the underlying drivers of the mistake, is redemption.

For me, I had to wait three years after the disqualification at the 2008 Olympics before I was able to compete in a relay at a global level.

Whilst this sounds like a happy ending, it wasn’t – our last leg runner repeated my mistake from 2008, leaving too early, and, as a result we were again disqualified.

For Karius, redemption is likely to be less obvious. He may not play in such a high-level game again, as recent reports have linked Liverpool with the search for a replacement.

Instead, given the nature of football, his redemption may come by cutting out the mistakes in regular games, so they become much less common.

The road ahead is difficult, but if he makes the right changes, he may be able to overcome his error-strewn record and not be remembered as the player who threw away the Champions League.

Craig Pickering is Head of Sport Science for DNAFit.