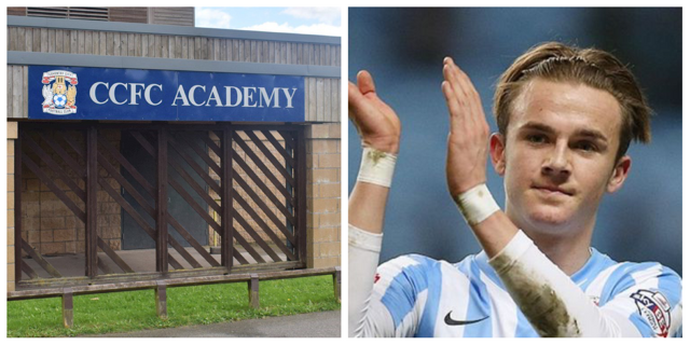 James Maddison is the star graduate of the Coventry City Academy

COVENTRY CITY have retained their Category Two Academy status despite an “unsettled” period behind the scenes at the club.

The club’s woes under owners SISU, a London hedge fund, have been well documented - a spell in administration, relegation to the fourth tier of English football for the first time since the 1950s and a season in exile in Northampton.

Yet during this time the Academy has remained an area of quality at a beleaguered club. Coventry were ranked 29th in our Academy productivity rankings for the 2016/17 season, with 27 of their graduates playing first-team football in either the Premier League, EFL or National League.

Last season 14 of their graduates made appearances for the first team as Coventry were promoted back to League One via the play-offs. Their star graduate is midfielder James Maddison, who is now making waves in the Premier League following a £20m move from Norwich to Leicester in the summer.

However, even the Academy faced an uncertain future up until May, when a deal was signed with the Coventry Sports Foundation to remain at the Alan Higgs Centre for a further five years. Before then, there was the real prospect of the Academy having to find another home.

Now it has also retained Category Two status and Academy Manager Richard Stevens said: “It’s been two years of hard work for everyone at the Academy. We were audited 18 months ago.

"We got an action plan and there were three or four points that we had to address. Back in May I went to the Premier League offices, and we got the letter a couple of weeks ago. It’s great news for everyone at the Football Club.

“It’s the accolade of playing with 24 other Category Two football teams. It’s the place a club of our size needs to be. It means we can attract footballers from the local area, we can have the right staffing levels and the facilities that we need. And as proven, you can push boys out at the other end and give them the opportunity to become footballers.

“There’s a six month lead up to the actual audit. For six months, you have to upload onto an online platform everything that you do – every document, every piece of paper, technical programmes, reports, staffing models. It takes over your life for three or four months of that lead up.

“They watch games, they speak to players, they speak to the chief executive and the manager – just to make sure that everything that is in our Academy Performance Plan is adhered to. Then after that you get your reports, you have to work on your action points and get to the stage you are now.”

“It’s exciting for everybody,” Stevens added. “We’ve probably been three and a half years semi-unsettled, in the fact that we thought we were coming out of the Higgs due to another sporting club coming here. That unsettled people a bit – it unsettles staff, parents, players.

“It’s probably a year ago that we got a little sniff that we might be able to stay, because we were working hard to try to find other facilities. It was proving difficult, and a big investment to put it right.

“Once we realised we could stay, and we speak to the Alan Higgs Centre and the Trust that are involved with it and we look at a new indoor area and a refurbished outdoor pitch – all of a sudden it becomes exciting.

“Agreeing to the five-year deal here flips everything on its head from a year ago. People are settled now and can see we have got longevity here.

"We can settle down to becoming an Academy that can really work again.

“The building work is exciting. Players, parents and opposition teams can see what is going on. I would suggest in five or six weeks’ time it will all be operational, and we will have a really full end Academy going as we have in the past.”