Coaching revolution that took Belgium to top of world

AT Euro 2000, Belgium suffered the ignominy of crashing out in the first round of a tournament they were co-hosting.

What followed was a complete overhaul of the way that the country coached its youngsters, leading to a change in fortunes that saw the team rise from 66th in the Fifa World Rankings to the very top in 2015.

As Director of Coach Education, Kris Van der Haegen has been at the heart of this transformation. He told the Way of Champions Podcast how it had been done:

Van der Haegen (below): We organised the European Championships along with the Netherlands in 2000 and couldn’t even make it to the second round. When things are going very well, people don’t want to listen. That was the perfect moment to get everyone around the table and ask what we were doing wrong. The key for change was coach education.

One of the main principles is that the main actor is the player; not the coach, not the team. Then it’s very easy to understand that in children’s football we have to do what they like. We call it the tailor-made approach. Who is in front of me? Look at the characteristics of the player and then adapt the environment to fit them.

Kids want to play football in their own way, not the way adults want to play. If you put a child on an adult’s bicycle, they’ll say, "are you crazy?" But this is what happens in football, we ask them to play 11 v 11 or 8 v 8 at a very young age. They are not able to do it.

As a child, how did you start playing? In my case, it was with my brother, playing 1 v 1 at home, in the garden, in the garage, dribbling and scoring.

We created a format that is tailor made for this. We put one player in the goal and one on the pitch and at five, six years old, they play 1 v 1 with the goalkeeper and they adore it. They have a lot of touches, a lot of scoring opportunities. It’s all about that fun environment and fun means scoring goals.

They play two halves of three minutes, then they go to the next pitch. The winner goes to the left and the loser to the right. After one or two games they’ll be playing against a similar level of opponent and everyone scores goals, everyone wins games, which makes it fun.

I remember at my home club, some of the parents said: “Kris, you’re crazy. What are you doing? Football is a collective game and you’re making them play 1 v 1 and a goalkeeper.”

I said: “Yes, football is a collective game – but only when they are teenagers and adults." When they are five years old, they don’t want to pass the ball, they just want to dribble and score.

We used to play 5 v 5 at six years old and had a big problem, because there was only one ball and some players never had a touch of it. After a few weeks, they'd say, “I don’t like it, it’s not fun.” 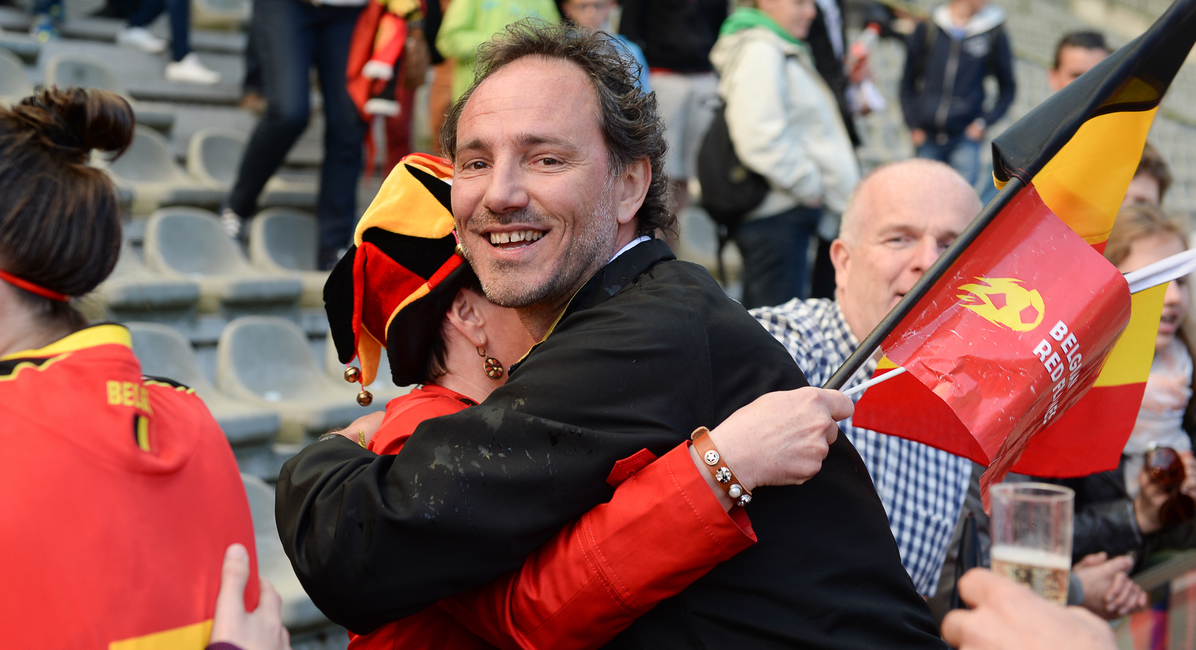 This is an amazing project funded by the Flemish government. It is about basic motor skills - teaching them to move and preparing them for choosing a sport when they are older. That is an approach we wanted to focus on more and more - making children active in several sports and at a later age they can decide if they prefer basketball or football or whatever. That is very important.

Parents tend to look with the glasses of adults. They say: “I want my child to play football. Now I’m seeing him catching balloons.” But you have to start with the basics. If they are not able to master these, then they cannot go into complex situations. Then they will stop loving football.

When I started playing football, 45 years ago, it was on the streets. Often I'll ask coaches “who played street soccer?” There was no referee, so you could try anything, and there was no coach, so there was freedom.

If you want creative players, you must create an environment of freedom. That means a coach who observes, who is there as a guide, who will help them reach their destination, but not a PlayStation coach, who says, "do this, do that," who makes the decisions instead of them.

Create the environment, free them and help only if it's necessary. Let the kids discover – they are more intelligent than you think they are.

Football is complex and it is a decision-making process. Young players must be in an environment of making decisions by themselves. Once the game starts, the coach is out. The player has to read the game, makes the decisions.

In training, this is what you have to simulate – real game-based situations where they can make decisions, read the game and learn from it. This is very, very important.

They have to learn to be aware of space and time. In football you have opponents. You might want to do a passing and shooting drill as a warm-up, but then you have to go into situations where the players are aware of the opponent and are thinking "how can I create space for myself?"

All these things you can only learn in game situations. When I was a young boy and we had to pass from one cone to another in training. It was so boring. We used to say: “Coach, when are we going to play a game?”

READ MORE: Meulensteen - how to develop a gem like Rashford

We have changed this completely. One of my slogans to coaches is “make your players love the game.” After that, you can help them learn the game. They love the game through maximising game situations.

We don’t have league tables until the Under-14 level. That was one of the big battles for us. Coaches shouldn’t be concerned about tables and trying to win trophies before this age - they should be thinking about developing players.

Coaches are inclined to focus on winning the game. That makes them play the big, strong players who give them the best chance of winning, so the late developers end up on the bench 75% of the time.

The second thing we did was play four quarters. At the end of the first and third quarters all the subs had to come off the bench. That was the only time the coach could make substitutions. Otherwise they don’t develop, because they’re on the bench watching the game instead of participating in it.

Remember that slogan again – love the game, then the learning can start.

7. LOOK AFTER THE LATE DEVELOPERS

Late developers will go one year lower if they need to. Then they can play in an equal battle and show their skills. If you don't do this, you can lose some big talents who are late maturers. Nacer Chadli, Dries Mertens, Kevin De Bruyne – they were all late maturers.

In fact Kevin did not appear for the national team until the Under-19s - now he is considered the best player in the Premier League!

In Spain, Real Madrid and Barcelona are really focussing on late developers, because they are aware of what they can do. If you give them the time to grow, they can develop into a Messi or an Iniesta!

These are the players who have really developed their brain, the intelligence and this is what modern football is – reading the game and making quick decisions, being able to execute what you have in your mind.

CHELSEA WOMEN boss Emma Hayes says it's 'bonkers' that there isn't more diversity in football. Research, plus the experience of other industries, backs her up.

OUR Python Masterclass will give you an introduction to the football capabilities of one of the world's most popular programming languages.

CARDIFF CITY Head of Analysis Jack Radusin reveals how the club use live video on the bench on matchday.

Hidden agendas: Study in change at a League One Academy

"If you’re not a political animal, you get swallowed up." A fascinating study reveals how change at the top of a League One club impacted staff in the Academy.

How will Woodward exit impact Man Utd on the football side?

THE much-maligned Ed Woodward departs Manchester United at the end of the year following the European Super League fiasco. We asked insiders how the Executive Vice Chairman's exit will affect football operations at the club.