Coaching adventures on 'a tiny dot in the Pacific'

THERE aren’t many national technical directors who would regard a 9-0 defeat as a major achievement.

Then again, there aren’t many who only have seven clubs to select from on an island of 17,000 inhabitants. That’s why Jess Ibrom, the Norfolk-born technical director of the Cook Islands, was so delighted when his women's Under-16s avoided losing by double figures against New Zealand last year.

We’ve written before about the limited opportunities for homegrown coaches in English professional football, especially if you haven’t played at the top level. This was the situation facing semi-pro player Ibrom when he decided to dedicate himself to coaching at the age of 21.

After managing a community football scheme in King’s Lynn, gaining his coaching badges and attending training at as many pro clubs as would let him in – “everywhere from Rotherham to Chelsea” – he decided his best chance of progression lay abroad.

So he fired off four or five speculative applications a week, eventually landing a role on an MLS camp in Pittsburgh, Pennsylvania. That kickstarted a coaching career that has taken in spells in the US, Mexico, New Zealand and the Cook Islands.

It’s the third smallest nation on the Fifa rankings (after Montserrat and Anguilla) and Ibrom can still remember “flying over this tiny dot in the Pacific Ocean” with his wife and "realising this was about to become our home.”

The coach, who holds both the US and Uefa A Licences, certainly had an interesting introduction to life on the main island of Rarotonga.

“We arrived on a Sunday and moved into our house, a three-bedroom period property overlooking the sea," he remembers. "On the Tuesday, while we were both out, eight prisoners were taken round where we lived on a day-release scheme.

“When we arrived back, we saw that a window was open and we'd been broken into. The only things that had gone were a bottle of vodka and a bottle of rum that we’d brought through duty free.

“We later found out that the eight of them had drunk the two litres while they were in the house and then moved on, without taking anything else. When the president of the Football Association heard about it, he took us out of the house and moved us to a new-build where you could hear the waves outside.”

Ibrom’s main task as technical director was to build development squads - from Under-12s to seniors - and establish a pathway through to each international tournament. This was a new initiative for the country, whose men are 194th out of 211 in the Fifa rankings.

“The standard was very low, I’m not going to lie,” Ibrom admits, “it was decades behind Europe. But on a positive note, that means you can make a big impact.”

You suspect that Ibrom, who exudes a cheerful affability, tends to look for the positives in life.

There are about 400 registered footballers in the Cook Islands, mainly playing for the seven clubs on Rarotonga – one in each of the main villages. And a major positive was that the main training centre (below) was surprisingly good. 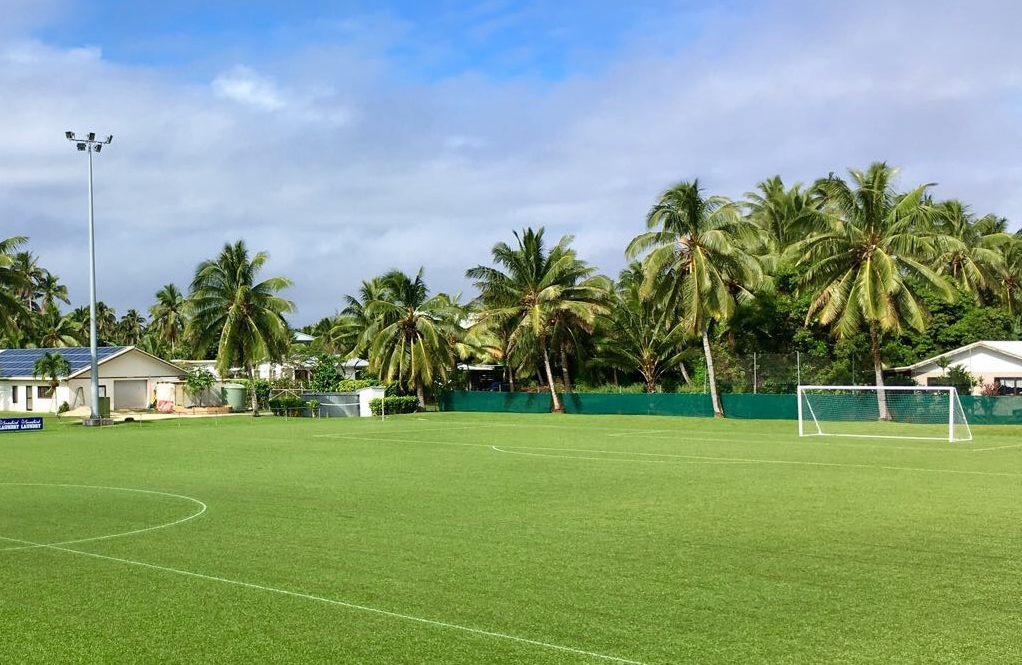 “The main pitch was really good quality and there was another training pitch, a lecture room, residential block, offices and a gym. If you went into the seven villages, the pitches were shared with rugby union and the quality was just about adequate, but it wasn't too bad overall.”

Fifteen islands make up the Cooks and Ibrom visited most as part of his job. He remembers one in particular - tiny Mitiaro, “four miles across with a population of 100” to mentor local coaches. “That was a unique experience I'll always remember,” he says.

The culture on even the main island of Rarotonga was different to anything Ibrom had experienced before.

"The people get things done, but in their own time,” Ibrom says. "If you set training for 4.30pm, it would start at least 15 minutes later, because the kids have chores, like cutting the grass, or they might have to go to church. At first it feels wrong not to start on time, but you get used to the culture."

One of the best pieces of advice Ibrom received came from Paul Smalley, one of his tutors on the FA's A Licence course, who is now technical director with Bangladesh.

“He told me to be visible - at games, in the village shop, at community events - and then people would see me and give me their trust," Ibrom remembers. “He was absolutely spot on.

"I found out that once you gain people's trust on the Cook Islands, they give you absolutely everything.

"They’re really beautiful people – genuine, generous and the most humble I’ve ever met. You learn that victory comes in different forms. That can include losing 9-0 in an under-16s semi-final against New Zealand, but knowing that your players have given you absolutely everything, both in training and in the match, and improved so much."

Having made lifelong friends during more than 18 months in the country, Ibrom has now left the Cook Islands for family reasons and is living in New Zealand once again.

His coaching journey continues and, once again, he is willing to look anywhere in the world for opportunities. Ibrom may not yet have hit the heights of the pro game yet (although it's worth remembering that Andre Villas-Boas started his career with the British Virgin Islands), but is truly elite when it comes to experiences.