Ancelotti took Broad with him to PSG

CARLO ANCELOTTI has paid tribute to Nick Broad, his former performance supremo at both Paris Saint-Germain and Chelsea, who died five years ago at the age of 38.

Broad was killed in a traffic accident in Paris after breaking down on the side of the road. At his funeral, Paul Clement described the Englishman as Ancelotti's "best signing", a sentiment the Italian concurs with.

"Nick was really, really humble," Ancelotti told TGG. "He could speak with everyone to explain his philosophy. He was really focused on his job and really loved his job.

"We worked together but in the end he became a really good friend. We spent time together and had fun together. He is a big loss for us."

When Ancelotti arrived at Chelsea in June 2009, Broad was Head of Science. The Italian admits he initially wanted to bring in his own staff from AC Milan, replacing those already in place, but soon changed his mind.

"I wanted to bring my own staff, but the club said, 'before you make a decision, check the staff and tell us if everything is ok and if you want to change something'. So I used the first two months to understand the staff who were there, including Nick.

"He was working there doing a lot of things - checking the training sessions, collecting data with GPS and cardio, doing nutrition for the players. He was working with [fitness coach] Glen Driscoll. I was impressed, because he was young but really experienced with a lot of knowledge and motivation. I was surprised.

"Of course you have to delegate, so it is important to have people around you that you trust. I had total trust in Nick, because he was really, really focused on his job. He was really concentrated and for 24 hours a day he was always available."

Chelsea won the Double in Ancelotti's first season in charge, but he was sacked the following year after a relatively disappointing campaign. PSG, newly-acquired by Qatar Sports Investments, soon came calling for his services.

They wanted a world-class team assembling both on and off the pitch - and Ancelotti immediately knew who to call.

"Paris Saint-Germain wanted to build a top team, but didn’t have experience of this," he explained. "They were different to Chelsea, because they didn’t have the same experience as a club.

"We also built a new gym and Nick was involved in all of this. Even GPS, which Nick was expert in – everything was new for them."

Paris was where Ancelotti and Broad - as well as fellow Englishmen Clement and Jack Nayler - became not just colleagues but good friends.

"We met each other a lot of times after training, because Nick was far from his home and his friends," Ancelotti explained. "We spent time together as families and still have a good relationship with his wife Paula."

Ancelotti can still clearly remember where he was when he heard that Broad had been involved in a serious accident. 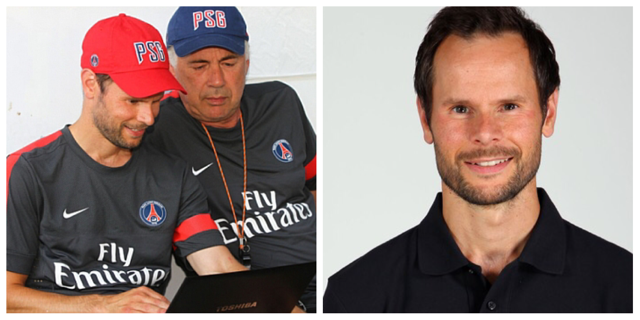 "I was in a restaurant and Paul [Clement] called me and told me Nick had had an accident. I stopped eating and went immediately to the hospital and stayed there."

Broad had broken down on the side of the road after going to visit one of the PSG players and had been hit from behind.

Clement later remembered: “He called me and said, 'You might need to come and get me, I’m struggling here. I’ve broken down on the side of the road'. But when I called him back his phone was just ringing and ringing.” He died in hospital in Paris on January 18th.

PSG were due to play a league game at Bordeaux just two days later, but preparing and playing was obviously the last thing anyone wanted to do.

“The staff and players were really affected," Ancelotti remembered. “We tried to stop the game but it was not possible. It was really difficult to train and to play. We played in Bordeaux and won, but the situation was very terrible.”

There had been a minute's silence before kick-off in the game, and when the camera panned to the bench, you could clearly see tears in the Italian's eyes. PSG won 1-0 thanks to a Zlatan Ibrahomovic goal and at full-time staff and players gathered in a tight huddle.

There was also an impeccably-observed minute's silence at Stamford Bridge before Chelsea's game against Arsenal that day, with the home players wearing black armbands in tribute to their former colleague.

Ancelotti praises PSG's hierarchy for the way they behaved in the days that followed.

"The club organised a flight and the staff and players attended the funeral. PSG was really correct to help Paula to organise everything."

In 2013, Ancelotti took over at Real Madrid, taking Clement and Nayler with him, but the absence of the fourth member of the quartet was always keenly felt.

When Clement was asked about his friend in an interview, he said Broad “would be here, 100%, because I know Carlo had unbelievable respect for him".

Broad's legacy lives on though - through his mentees and the way he developed his profession.

Martin Buchheit, now Head of Performance at PSG, said, “Nick inspired me. He changed my views and daily work, which will never be forgotten.”

Others remember listening to him at conferences or phoning for advice. Tom Little, the Head of Sport Science at Preston, said: “Nick clearly had such a passion for the industry and his standards were so incredibly high. You couldn’t help but be inspired just by speaking and listening to him."