Altman becomes one of largest shareholders in Rochdale

DAN ALTMAN, the former Senior Adviser for Football Operations at Swansea City, has become “one of the largest shareholders” in League One side Rochdale.

The 45-year-old American released a statement today explaining that he and fund manager Emre Marcelli had purchased shares “owned by three of the club’s major backers” in the last year.

Altman, who worked for Swansea for almost two years up until October 2018, owns North Yard Analytics, NYK Capital Management and the smarterscout platform. In his role as senior adviser for the Kaplan-Levien Sports Group, he also worked for their other club, DC United.

In a joint statement with Marcelli, which you can read at the bottom of the page, Altman said: “We have been in confidential discussions with the board for some time regarding a possible purchase of the club’s unissued shares. In the midst of these discussions we were privately offered shares owned by three of the club’s major backers, which we duly purchased as individuals.

"We consequently became two of the club’s largest shareholders. Our primary aim is to guarantee the club’s long-term financial stability and success on the pitch.”

Last month it was revealed that Rochdale Council had made a loan to the club that was repayable within 12 months. The council believed “not making the loan would potentially place one of the borough’s most significant assets at risk” because of the impact of the coronavirus pandemic.


Altman is a Harvard economics graduate with a background in advanced analytics. He explained that he and Marcelli had proposed an initial investment intended to provide the club with a “permanent training ground to include facilities for the Academy”, replace the pitch at the stadium, hire a full-time Sporting Director, provide “funds to bolster the squad” and to recruit “additional commercial staff”.

"Together with the implementation of our analytical tools and resources of our global network in professional football, we hoped that these investments might equip the club to rise up the table in League One and even compete for a place in the Championship."

He added: "We are not billionaires, nor are we fronting for one. Rather, we believe that with some prudent investments and carefully attentive management, the group can grow in a sustainable way.”

ADD (June 5th): Rochdale released a statement responding to that of Altman and Marcelli. The club said that the duo’s shares had been purchased privately, that the club “has not benefited financially from the transaction” and that discussions about an investment opportunity stalled last year.

“This occurred through the process of a share transfer whereby the shares were purchased privately from existing shareholders. Consequently, RAFC has not benefited financially from the transaction and there was no requirement for the Board of Directors or Shareholders to authorise the transaction.

“Prior to this RAFC had been approached about a potential investment opportunity. Whilst discussions were held – under the protection of a Non-Disclosure Agreement – those discussions stalled last year.

“At this time no further discussions are planned. The Directors continue to explore options for outside investment into the club but would like to reiterate that any potential investment options will be carefully assessed to ensure that the long-term future of the Club is protected for this and future generations of our fans.”

Full statement from Altman and Marcelli 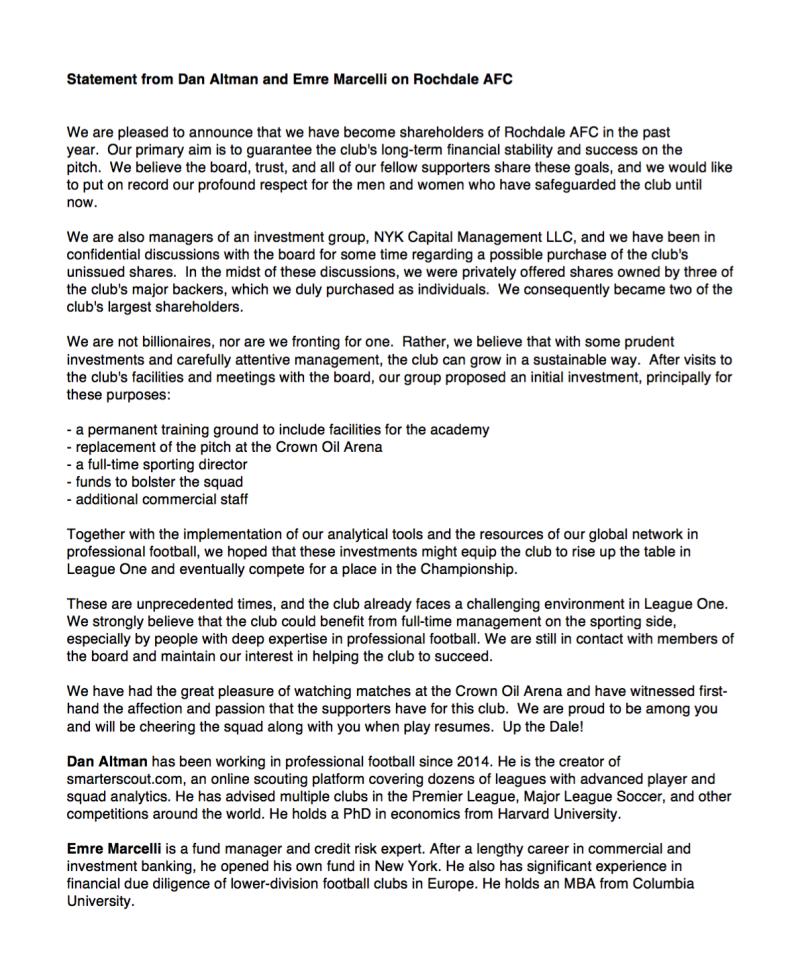