The training session, which you can watch below, is designed to develop a striker's strength and technique in holding up the ball and proves that weather and budget shouldn't be a bar to success. The drill took place in the gym at County's training ground, involving only rugby tackle pads and a gym ball.

In the video, Smith, 36, holds off a defender buffeting him with the tackle pad, then lays off the ball. 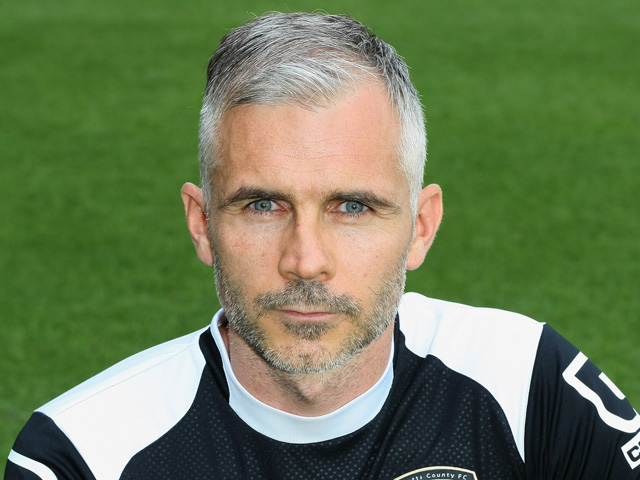 Wilson (pictured) told TGG: “A lot of League Two footballers have a problem holding up the ball and keeping possession. This drill is about controlling the ball when you receive it, even when the defender is very close and physical.

“It’s about receiving it with the front foot, which makes it harder for it to be nicked by the defender.” In the second drill, fitness coach Mike Edwards - a former County player - pushes a gym ball back against the wall while receiving the ball. “This is great for developing the quads and lower limbs,” Wilson explains. “After a few minutes of this exercise your legs are really burning.”

Smith won 19 caps as a striker but later converted to a midfielder at Manchester United following a horrific leg break. Now he's plying his trade at County and took caretaker charge for the 4-1 defeat by Morecambe earlier this month, before Kevin Nolan took over as permanent boss.

Wilson revealed: “We met Kevin on the day he was appointed and he’s very keen on the sports science side of the game.”

TELESTRATION elevates the storytelling power of video, which is why TGG have teamed up with Tracab to bring you a Coach Paint Masterclass on Thursday March 25th. It will be delivered by Benfica Under-23 assistant manager João Nuno Fonseca.

A PLAYER'S position only tells us so much about them - as a comparison of Roberto Firmino and Robert Lewandowski shows. Paul Power of Stats Perform explains how we can carry out some more sophisticated analysis of a player.